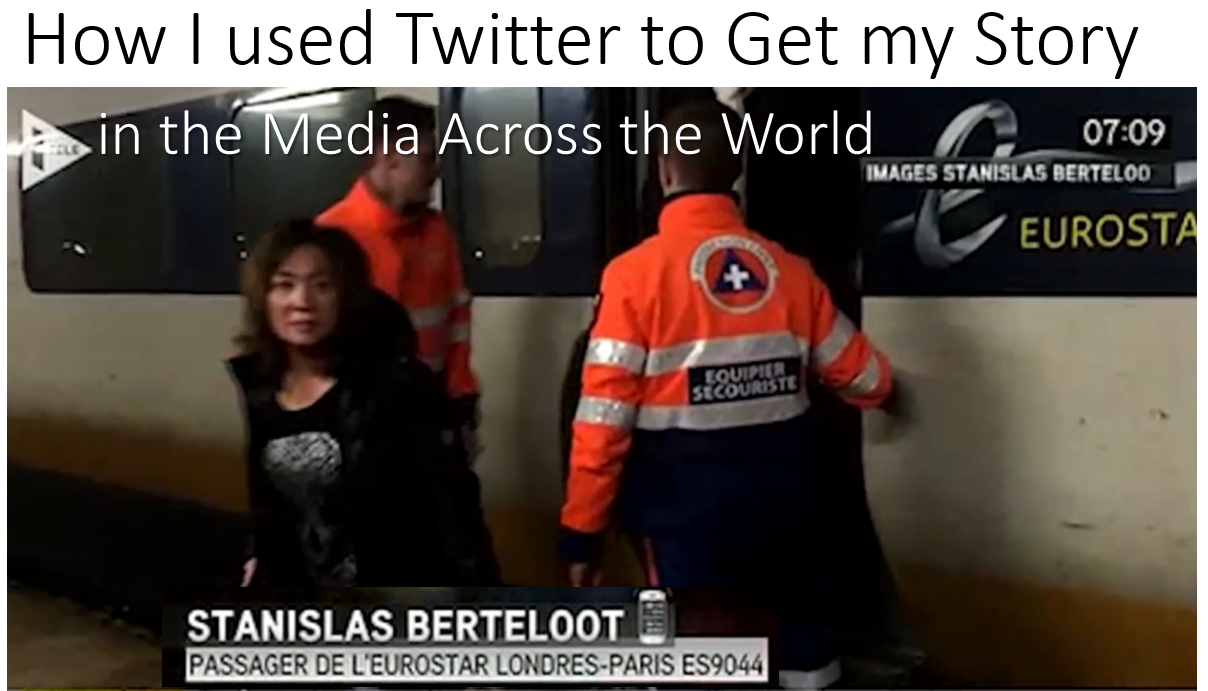 Eurostar Fire: Stuck 11 hours on the Train, How I used Twitter & Social Media to Get my Story in the Media Across the World

How a Family Trip Turned into a Nightmare

I spent last weekend in London with two of my daughters aged 10 and 13. It was a fun father-daughter trip: A nice mix of cultural visits and shopping on Oxford Street.

We even stopped at Harrods for scones and tea… The girls loved it.

This weekend would have been perfect if the engine of our Eurostar hadn’t caught fire on the way back to Paris.

The train, which was scheduled to arrive Gare du Nord in Paris at 8:47 p.m. Sunday, got stuck in the middle of the French countryside for 8 hours before being towed to Arras where we had to transfer to another train at 2 a.m. to finally reached Paris shortly before 5 a.m. on Monday.

The Train From Hell

The train was packed with families, babies, and pregnant women. The fire had damaged the catenary system and the train’s batteries quickly ran out. No electricity meant no public system for announcements and updates, no light – we sat in the dark, no ventilation…

Despite its best attempts, Pierre, the Train Manager had a tough time informing the 700 passengers seating along the 17 carriages.

To make things worse the two carriages next to the engine in fire had to be evacuated and the people flocked the already crewed cars, seating on their luggage blocking the alleys.

Imagine 700 people trapped in the dark. The air was heavy and babies started crying. People felt dizzy. Buffets ran out of food and water. People grew frustrated and complained about the lack of information, although, I must say I was surprised at how calm most people were.

At 6 a.m. on Monday, three French national TV channels had broadcasted my videos – one TV channel included my recorded phone interview. A national radio had aired my three minutes interview and countless newspaper websites around the world had used my Tweets @Berteloot and videos on their reports. This already huge coverage could have been even broader if I hadn’t gone to sleep and switched off my phone at 6 a.m. When I switched my phone back on at 11 a.m. I had several text messages, emails and Twitter notifications from radios and TV trying to interview me. I check the Web and LCI, iTELE, RTL, BFMTV, Le Figaro, Europe 1, M6, The Evening Standard all contacted me, have used my videos, my interviews or both! 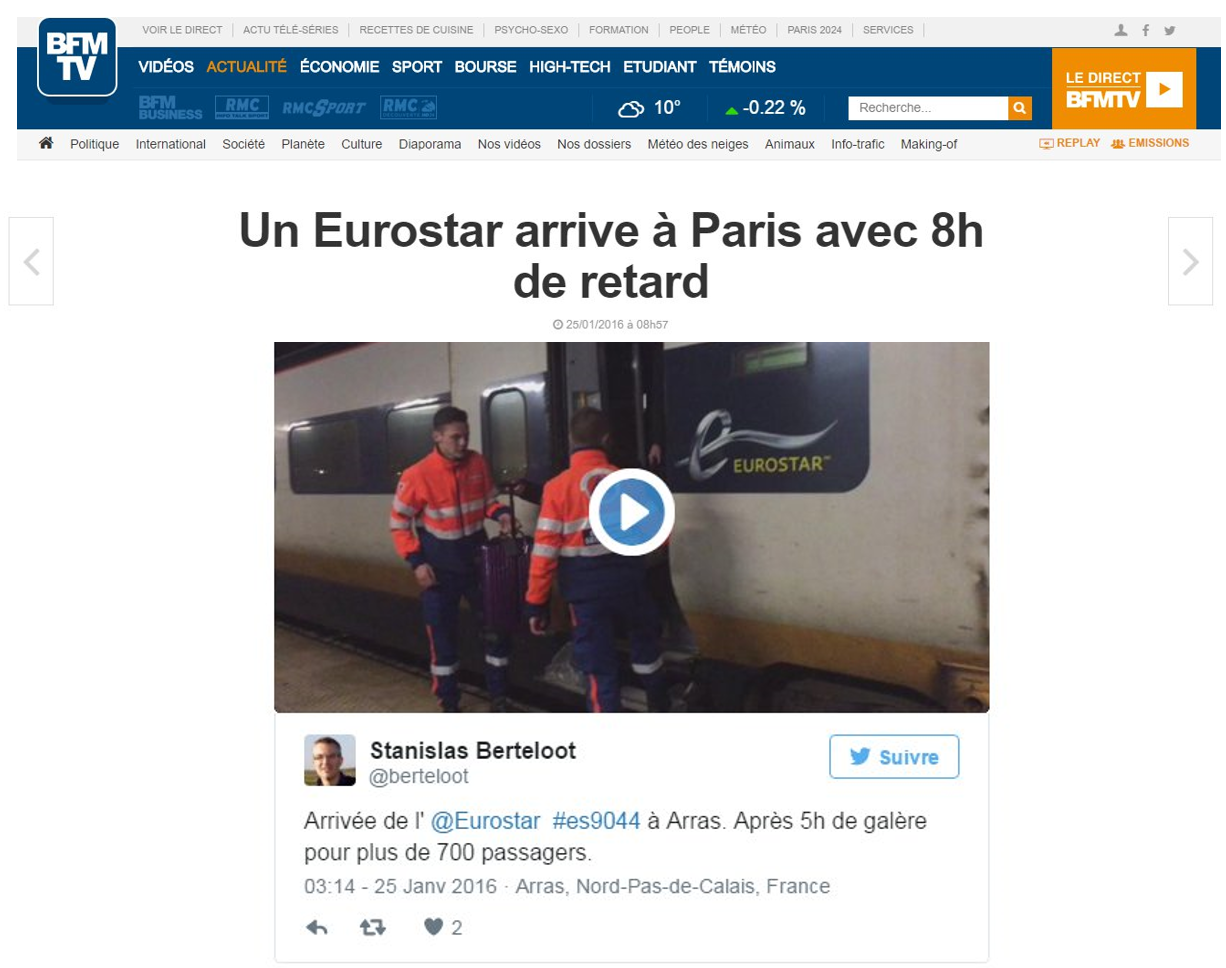 Here is how I made it happen:

To have a chance to be noticed, always address someone by adding that person’s handle in your tweet. This way, you may get a reply or at least people that search for that Twitter handle may see your post.

People tend to reply when being talked to. Ask them a question, engage them and comment on what they have posted.
My first Tweet that evening read:

@Eurostar Train #9044 stuck with no engine. Electricity running out. Might go in black out soon. Great…

2- Join the Conversation: use Hashtag

Search Twitter to find which word(s) are used to organize the topic you are addressing. In my case, I notice that @Eurostar was using the #ES9044 hashtag to communicate about the incident. Hashtags are important since they turn any word of a group of words that directly follow the pound sign (#) into a searchable link.

I posted 12 tweets within three hours before being first contacted by a journalist from LCI and during the entire incident I sent 41 tweets! There are about 6000 tweets sent every second… So if you want to stand a chance to be noticed, tweet often but remember to change your tweet content (Twitter won’t let you send twice the same tweet) and keep on using your topic’s hashtag and the handle of people you want to be noticed by.

Retweet the best content you find on your topic and “like” contents from people you want to be noticed by. Chances are they will return the favor and journalists will end-up noticing your tweets.

4- Use visuals to stand out

I have read that tweets with a photo get 313% more engagement.

Although I cannot verify this statistic, I can testify that the first journalist to contact me responded to a tweet of a photo. 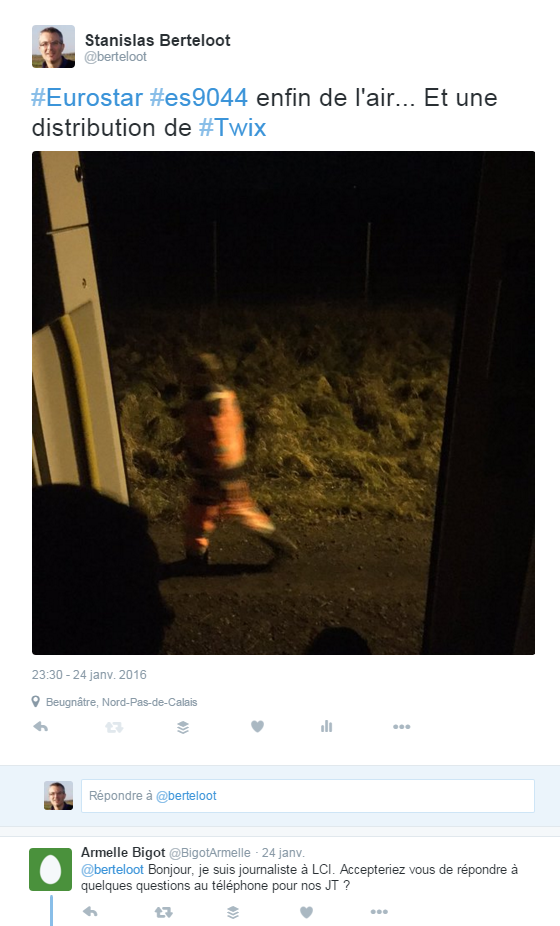 I then tweeted a video that went viral as many publications and even TV channels used it (within its Twitter skin) in their report. 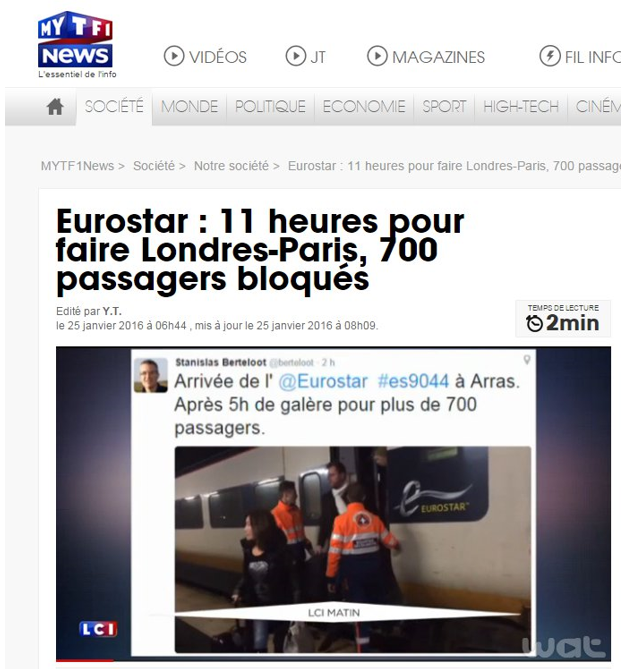 Images can also be a nice way to extend your 140 characters limit. You can also post infographics and stats, which are always popular on Twitter.

In addition to using visuals, add links to your tweets as they increase your chances to be noticed and retweeted.

5- Live in the Instant

When a journalist wants to engage with you don’t think twice as you may lose your chance of getting quoted.

Four things you need to do very quickly when contacted on Twitter:

6- Make Things Simple
Help yourself by making a journalist’s life easier. If you want to increase the odds of getting a journalist to write about your story you’ve got to make it incredibly easy for her to do so.

Stuck on the Eurostar the only thing I had was my iPhone 6 and my Anker 13000mAh external battery (enough juice to last a long, long time…).

If like I was, you are lucky enough to have a good connection and a nice data plan you are in good shape.

Here are three important things to do to increase your chances to get your story covered:

Strategies to Control your Business’ Reputation

Eurostar Fire is a perfect case study of online reputation and crisis management.

Four key takeaways from this incident:

Learnings from Eurostar:
24/24-community management. Engage in a conversation. Eurostar did a fantastic job both online and offline. On Twitter, @Eurostar started to engage very quickly with Twitter users. Using the #ES9044 hashtag they addressed people by their Twitter handle and provided friendly, factual updates about the situation throughout the night. @Eurostar did a good job at apologizing, saying thanks, or just showing empathy and joining the conversation as a human. @Eurostar is indeed now fully social media matured!
The Twitter feed was a nice support to the train staff overwhelmed by upset passengers. Staff had to go up and down the cars providing updates to travelers. 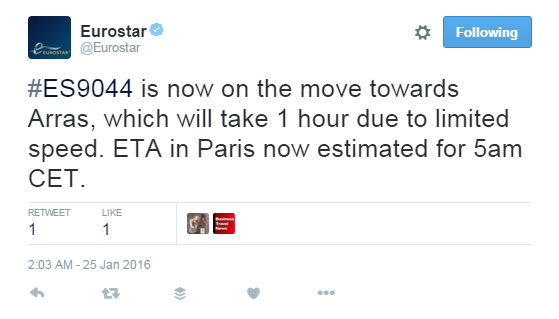 On the train, the team did a good job. The Train Manager introduced himself as Pierre which made his addresses more personal. People in the train appreciated his factual to and professional yet casual style.

Areas for improvement: Pierre should at time have provided clearer orders. Orders which could not have been misinterpreted. Also, remember that when in doubt, leave it out. Eurostar should also have avoided fear-inducing sentences such as “you are totally safe in the train” which the train manager repeated often and that passengers started to question.

Note: Eurostar has recently decided to internalize its social media community management, that’s indeed a great move. Having internal staff on Twitter means more knowledge of the internal situation and more responsiveness in time of crises.

Be transparent. Even when you are wrong being straightforward, transparent and friendly can sometimes turn an angry customer into a fan.
Learnings from the media
PR is dead: media go directly to the source. One of the takeaway for businesses here is that corporations should encourage their staff and management to develop their online presence.
Of course, the Eurostar Fire incident is not relevant to every PR situations but the fact remains: journalists, whenever possible, will try to bypass the PR spin doctor and the marketing department to reach out directly to their sources.
By trusting your employees to speak out publicly your organization will maximize its outreach and increase opportunities to be heard. Now, if you managed to get your top management to tweet, make sure you organize a media training session before they start speaking to the press.
News doesn’t wait
Again if we look at the Eurostar Fire incident it is interesting to note that I obviously wasn’t the only guy on Twitter that night, others were asked to testify. I was, however, very quick to respond and to provide quality content. That made the difference.
The same true with corporate PR and unless a journalist has been assigned to write a profile on your CEO or your company, you won’t be the only interviewed and if you delay your reply journalists will find someone else to quote.